skip to main | skip to sidebar

English is the result of Norman soldiers attempting to pick up Anglo-Saxon barmaids, and is no more legitimate than any of the other results. - H. Beam Piper

Despite the murky origins of the English language, it is the language of international commerce and science: if you attend an international conference in, for example, China, the presentations and proceedings will be in English. The same applies to the international scholarly journals. Being able to communicate effectively in English is therefore essential for anyone who wants a good career in academia.

Now, if you ever heard me speaking, you'd have probably have trouble understanding me: my New Zealand accent means that I flatten my vowels, my voice is nasal, and I speak too quickly. But, I do write fairly well, and I do avoid the grammatical errors below that really annoy me. Don't feel too badly if you aren't a native English speaker and make these mistakes: I noticed most of these mistakes while teaching New Zealand undergrads. That is, these are the kinds of mistakes that native speakers make in some parts of the world. They're still mistakes, though, and should be avoided.

3) Literally means what you said is as it actually is. If you were to say "it is literally raining cats and dogs", then cats and dogs should be falling from the sky. Jamie Oliver is particularly bad for abusing this word: "and you literally put the mint in the mixture..."!

4) Your and you're. "Your" means it belongs to you. "You're" means you are. Can you see what is wrong with this picture? 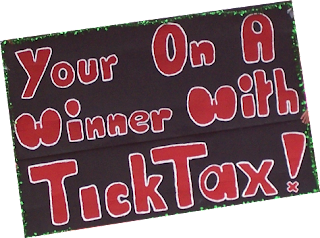 Dear Tick Tax: this is your sign, and you're using incorrect grammar.

6) Its and it's. It's is short for it is. Its means something belongs to it. For example: "I saw a dog and said "it's wagging its tail"".

7) There, their and they're. There is a place. Their means something belongs to them. They're means they are. Example: "They're at their house, which is over there".

These are the errors that annoy me the most. For two excellent articles on common errors in academic writing, see "Don't torture your reader" parts I and II, by Professor Corey Bradshaw at the University of Adelaide.
Posted by Mike Watts at 11:27 AM